A refrigerator doesn’t actually create cold. It removes heat. Cold is the absence of heat, and the complete absence of heat is considered absolute zero, which is −459.67°F −273.15°C.

You may wonder where the “cold” came from, here is a little more physics. As the refrigerant pushed through a sealed system of tubing by the refrigerator’s compressor it moves from a very thin capillary tube into the larger tubing of the evaporator. As this happens the pressure of the refrigerant is greatly reduced causing it to boil at a lower temperature, greatly increasing its ability to absorb the warm air within the freezer compartment.

Inside the freezer, a fan circulates air over the cool tubing and the refrigerant absorbs the heat from the freezer’s warmer air.  Just like wind moving from a high-pressure zone into a low-pressure zone to equalize, heat will move toward cooler areas to try to equalize.  Equality cannot be achieved because the now warm gas continues through the system to the condenser. As the heated gas flows through the condenser coils on the back or under the refrigerator, the heat within the gas leaves in favor of the cooler air in the room, and the cycle starts again. If you prefer to just think of the fan blowing cold air into the appliance that’s fine; but technically, the heat is being pumped out rather than cold being pumped in.

In the page image you can see the refrigerator’s evaporator coil where heat is absorbed and removed from the appliance. This picture shows a refrigerator with a major problem, an evaporator restriction. This is when the gas is restricted from flowing freely through the coil due to a contamination restriction. 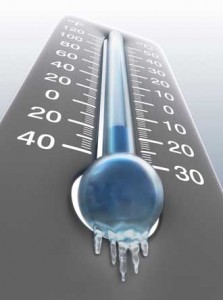 As the air in the refrigerator cools, the water in the air (humidity) condenses. Water that condenses in the freezer will freeze and become frost. Most modern refrigerators have an automatic defrost heater in the freezer, which cycles on from time to time to prevent the build up of frost. The defrost system is simply a heating element that is controlled by a defrost timer and a thermostat. The water from the melted frost drains out of the refrigerator into a pan beneath the refrigerator near the hot condenser coils or compressor and evaporates.

A door switch closes a circuit when the door is opened and turns on the interior light. When the door is open some refrigerators will disable certain components such as the fan, defrost heater, ice maker, or ice and water dispensing systems.

For more information on the individual systems of a refrigerator visit the troubleshooting common refrigerator problems or Refrigerator Physics page.