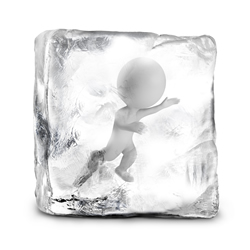 Cold is the absence of heat, just like darkness is the absence of light. The complete absence of heat is considered absolute zero which is −459.67°F −273.15°C. As heat is removed from an area the temperature measured will go down. A thermometer measures how much heat is present in a given area. The optimum temperature for storing most foods is just above freezing, about 35ºF to 38ºF. Water freezes at 32ºF. The optimum freezer temperature is about 0ºF. This temperature will not kill bacteria but it will nearly stop its growth and multiplication allowing foods to be safely stored for a longer period of time.

Heat is in constant motion. It flows from warmer areas to colder areas until an overall equal temperature is established. The movement of heat is called heat transfer. Heat moves from one place to another in three ways.

The three methods of heat transfer are conduction, convection, and radiation.

Convection is the transfer of heat in a liquid or gas as groups of molecules move in currents from one region to another. Warm air is less dense than cooler air. The less dense air rises while the cooler more dense air sinks. The heavier, colder air sinks and pushes the lighter, warmer air up. This circular movement is called convection current.

Radiation is heat energy transmitted through empty space or heating the empty space by electromagnetic waves or infrared rays. This process involves only the molecules of the substance radiating the heat. Radiation can occur through a vacuum and is the way the sun’s heat is transferred to Earth.

Lowering the pressure of a liquid will reduce its boiling point. For example wate

r which boils at 212ºF at sea level, will boil at 75ºF if its pressure has been reduced enough. As the liquid refrigerant moves from the very small capillary tube into the larger tubing of the evaporator, the pressure of the refrigerant is greatly reduced
, causing it to boil at a lower temerature partially turning into a vapr. This change into a vapor state greatly increases its ability to absorb the heat that is present within the freezer compartment.