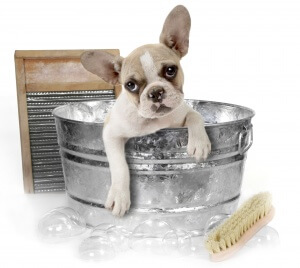 In today’s laundry detergents, enzymes such as proteases and amylases are some of the active ingredients. In the U.S., about 50% of liquid detergents, 25% of powder detergents, and almost all powdered bleach additives now contain enzymes to help break down stains that are otherwise hard to remove with conventional surfactants alone. Protein-based stains have traditionally been among the hardest to remove. Proteins can act as strong natural bonding agents that make all sorts of dirt adhere stubbornly to textile fibers. Anyone trying to wash away bloodstains can testify to this effect.

Soaps are useful for cleaning because soap molecules have both a hydrophilic end, which dissolves in water, as well as a hydrophobic end, which is able to dissolve grease and fats molecules. Although grease will normally adhere to skin or clothing, the soap molecules can form micelles, which surround the grease particles and allow them to be dissolved in water. Applied to a soiled surface, soapy water effectively holds particles in colloidal suspension so it can be rinsed off with clean water. The hydrophobic portion (made up of a long hydrocarbon chain) dissolves dirt and oils, while the ionic end dissolves in water. Therefore, it allows water to remove normally-insoluble matter by emulsification. In other words, while normally oil and water do not mix, the addition of soap allows oils to dissolve in water, allowing them to be rinsed away. 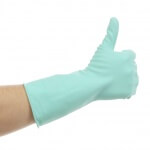 The earliest detergent substance was undoubtedly water; after that, oils, abrasives such as wet sand, and wet clay. The oldest known detergent for wool-washing is stale urine. (Now that’s what I call getting it clean!) Other detergent surfactants came from ox bile… Yummy!

The detergent effects of certain synthetic surfactants were noted in 1913 by A. Reychler, a Belgian chemist. The first commercially available detergent taking advantage of those observations was Nekal, sold in Germany in 1917, to alleviate World War I soap shortages. Detergents were mainly used in industry until World War II. By then new developments and the later conversion of USA aviation fuel plants to produce tetrapropylene, used in household detergents, caused a fast growth of household use in the late 1940s. In the late 1960s biological detergents, containing enzymes, better suited to dissolve protein stains, such as egg, were introduced in the USA by Procter & Gamble

Detergents, especially those made for use with water, often include different components such as: 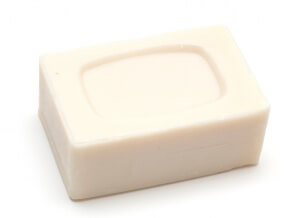 Surfactants to ‘cut’ (emulsify) grease and to wet surfaces. Emulsion is a mixture of two or more immiscible (unbendable) liquids.

Substances to modify pH (Potential for Hydrogen) or to affect performance or stability of other ingredients.

Caustics to break down organic compounds

Enzymes to digest proteins, fats, or carbohydrates in stains or to modify fabric feel.