Dancing Molecules | What’s A Microwave Anyway? | The Magic Magnetron | Microwaves…Can They Be Trusted? | Frozen Burritos & Beyond
DO NOT REMOVE A MICROWAVE OVEN CABINET UNLESS YOU ARE VERY COMFORTABLE WITH WHAT YOU ARE DOING!

Most foods contain water molecules. Each molecule of H2O has a positively and negatively charged end, just like the north and south poles of a magnet. The electromagnetic field of a microwave orients all of the positive ends in one direction.  However the magnetic field reverses 4.9 billion times each second. This causes the molecules to flip back and forth attempting to remain balanced. This microscopic flipping motion creates friction-producing heat. Glass, ceramic and plastic containers are water-free and thus remain cool, although heat transfer from the food gives the impression that microwaves are heating them as well.

To understand what a microwave is we need to look at the electromagnetic spectrum.  A microwave is a large radiation wave about 1 centimeter in length slightly shorter than ultra high frequency radio waves.  To give a general picture, an electromagnetic wave length between 1 meter and 10 kilometers (about 6 1/4 miles) is used for radio broadcasting. Visible light waves are between 300 and 650 nanometers that’s about 3.5×10 to the negative 26th power percent of the spectrum, that’s a lot of zeros!  On the other side of the spectrum are x-rays and gamma rays.  I wont even try to wrap your mind around how short a wave that is.

The microwave ovens transformer, diode, and capacitor raise your household electrical supply from 120 volts to about 3,000 – 4,000 volts.  The magnified voltage energizes a relatively small wire within the magnetron called the cathode filament. As the filament heats up it 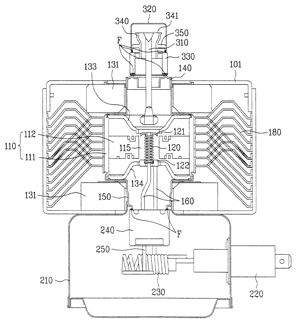 emits negatively charged electrons.  Large magnets generate a magnetic field that causes the cloud of electrons to revolve. As it does, spokes or arms are created that pass positively charged plates. Each passing spoke provides a negative charge to the cavity between the plates, which then falls off until the next spoke arrives. The rise and fall creates an electromagnetic field in the cavities that oscillates at 2.45 gigahertz. And that’s how microwaves are born. The newly created microwaves move through a waveguide into the cooking chamber, where the waves reflect off metal walls and stimulating any molecules receptive to this vibration.

Microwaves… Can They Be Trusted?

This magic box of electromagnetic radiation has been widely used since the 1950s.  “If everyone was jumping off a cliff would you?”  Well in response to that question I would usually ask “how many people jumped and how many survived because it looks like fun.”

Containing such a powerful force for the sake of fast meal preparation   can be intimidating, but the fact is microwave radiation in unable to leave the oven cavity because of its physical size.  It can’t leak out like a gas or water because it is a wave and just because we cannot see it doesn’t mean its small.  Even if the glass or plastic window were removed microwaves would still be contained within the small grid of metal that in imbedded within the door like a little maximum-security prison.  Enjoy your frozen pizza and fear no more…unless your in a riot and you see one of these…

Engineers will often use a platter or turntable that rotates food through the microwaves for more even heating.  Oven models without a turntable have a small spinning blade at the end of the wave-guide to thoroughly distribute the microwaves. It’s like playing microwave baseball!
A microwave oven must have some moisture in it’s oven cavity to work properly.  Running a microwave oven empty or regularly nuking extremely dry foods such as popcorn can greatly reduce your microwaves life span through overheating the microwave’s internal parts.  Placing a small amount of water in a container with your buttery treat will help to cool the microwaves components and extend its service life. Contrary to popular belief metal can be placed into a microwave; however, the shape of the metal is the most important aspect in generating the entertaining but also dangerous arcing effect that a ball of foil or a forgotten fork can cause.  Negatively charged electrons moving through the oven cavity can collect on a metallic point, such as a fork.  When the charge has built up to a point that the host material can no longer contain the charge will jump causing the all to familiar arcing effect.  Metal is often used in our favorite microwave foods to reflect back heat that is radiating away from the food for crisping and browning your hot pocket.