In this article I will outline the mechanical and electrical components used by your Electric stove top and oven to create and maintain the correct amount of heat, required to impress your better half with a candle light dinner.  I will also describe some of the problems that can turn your culinary masterpiece into a hungry man microwave dinner for two.

Cooking appliances come in two main flavors, Electric and Gas.  In this section I will primarily be discussing 240VAC electric cooking appliances, for a closer look at the gas variety
Check out “Cook’n With Gas”.

It’s fairly obvious that electric ranges require electricity to do their work, but how much and when is the subtle difference between a delicious home cooked meal and the drive through. Most electric cooking appliances are very simple machines that use heating elements to turn electrical energy into heat energy.  An electric cooking appliance can be divided into two systems the control system and the heating system. All of the control functions such as monitoring temperature and supplying current to the correct circuit at the proper time operate with 110 volts AC (called L1).  When the appliance needs to generate heat, an additional 120VAC is supplied from a second wire (called L2) to the heating element.  For an electric stove or oven to heat properly both supply wires providing 120VAC must be working properly.
Note: If your oven isn’t heating properly always start by verifying that both L1 and L2 are supplying 120VAC to the appliance (240VAC collectively).  For more information on how to use a voltmeter to test for current look at
“How To Use A Multimeter”.

Your oven is constantly cycling its heating elements on and off automatically to maintain a temperature range close to what you have set at the oven control thermostat.  Some ovens have more accurate thermostats than others.  The thermostat often will use a 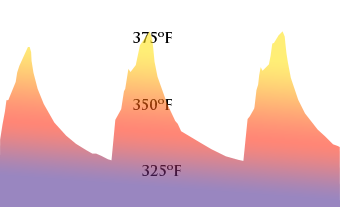 part called a sensor to measure the oven temperature. Once the oven has slightly passed the target temperature the thermostat opens the L2 circuit allowing the heating element to cool, when the oven as dropped to the low side of the temperature range selected the thermostat reenergizes the L2 circuit for more heat to be generated.  In this way a wave of temperature is produced. Most surface burners operate in the same way, but some use a device called a rheostat or a potentiometer to decrease the amount of current supplied the surface element producing lower temperatures.

There are 4 things that can cause temperature problems with your oven or stove top.

#1 The thermostat or sensor fails to detect the correct temperature within the oven cavity and doesn’t open or close the circuit when it should; causing an oven that is ether to hot or to cold.

#4 Or a conducting wire is cut or broken and cannot carry electricity to the heating element.

Some models have a thermostat control that can be calibrated for more accurate oven temperatures, instructions for oven calibration can usually be found in your models technical sheet, often located somewhere on the appliance.  Oven temperatures are calibrated at the factory and rarely need adjustment.

Shorted Element Video Note: While alarming this is a very common problem. A bad control module does not cause this! It is only a failing oven element, which is inexpensive and fairly simple to replace. Even though watching the light show is fun the best course would be to disconnect electricity by turning off the set of two breakers connected to the oven circuit.

Test: First unplug the oven or turn off the breaker. The oven’s heating element can be tested for resistance across its two contacts if the connecting wires have been disconnected.  In most cases the heating element can be pulled into the oven cavity after the internal mounting screws have been removed.
Repair Note: Make sure that you keep the connecting wires from falling back into the holes that the heating element passes through with some tape or by some other method or you will need to uninstall the stove and remove the backing to retrieve the wires making a lot more work for yourself.
If the oven’s heating elements seem to be okay the next step would be to test for 240 Volts AC from the two connecting wires when the oven element should be energized, if no voltage is measured or only 110VAC is measured you likely have a problem with the oven control or the oven temperature sensor. You will also want to verify that the oven is receiving a full 240VAC from the home.
Caution: Use extreme caution when testing energized circuits getting electrocuted is obviously not fun! And if your dead you won’t get to enjoy any more fresh baked cookies. You should not perform voltage tests unless you are comfortable with such procedures.