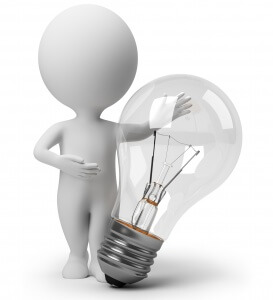 An appliance’s electrical system can be compared with your home’s plumbing system. Electrical current flows along wires in much the same way as water flows through pipes. Both electricity and water enter the home, are distributed through the house, do their “work” and then exit. With plumbing, water flows through a pressurized supply system. With electricity, current flows along “hot” wires. Current flowing along hot wires is also pressurized. The pressure of electrical current is called voltage. Larger supply pipes have a greater capacity to carry larger amounts of water. In the same way, larger wires can carry more current than small wires. Water is distributed for use by faucets, valves, and shower heads. Electricity is made available through receptacles, switches, and fixtures. Water leaves the home through a drain system that is not pressurized. Similarly, electricity flows back through neutral wires. The current within neutral wires is not pressurized and is said to be at zero voltage. Many people make the mistake of overlooking the neutral wires and connections during appliance troubleshooting. You would not ignore a leaking drain pipe in your wall! Don’t forget to consider the neutral connections during your appliance repair. Your appliance won’t work without them!

Circuit: A complete path from positive to negative through which electricity can travel.

Load: Component that converts electricity to heat, light, or motion. All loads restrict the flow of electricity while performing their work.

Conductor: Material through which electricity can flow. It will usually be a copper wire, and sometimes the chassis, or metal frame, on which the components are mounted.

Short: A circuit that offers no resistance to the current flowing through it. A direct short will cause a breaker or fues to blow and possibly start an electrical fire. A direct short is when electrons find an alternate path to a ground source that offers no resistance, such as water or a broken wire contacting the grounded metal cabinet of an appliance.

Shorted Switch: A switch that has fused in the closed position and can offer no resistance to the flow of current through it.

Open Switch: A switch that will not allow current to flow through it.

Closed switch: A switch that will allow current to flow through it.

Continuity: When an electrical circuit is capable of conducting current, it demonstrates electrical continuity. It is also said to be “closed” because the circuit is complete.

ELEMENTS of a CIRCUIT

A circuit must have a power source such as electricity supplied by a wall socket, battery, or generator.

Conductors are usually copper or aluminum wire, in some cases it can even be the frame on which the components are mounted.

The load is the components that do all the work through the use of resistance, such as a washer motor, heating element, or light bulb. 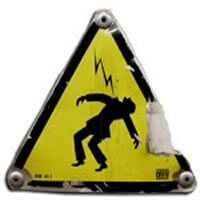 MEASUREMENT
An AMMETER measures the quantity of current flow. Ammeters are placed in series (in line) to count the electrons passing through it, in much the same way as a water meter counts the gallons of water flowing through it.

AMPERAGE UNITS
Current flow is measured in units called Amperes or AMPS. Amperage measurements can use different value prefixes, such as microampere (µA 0.000001), milliampere (mA 0.001), and Amp (A 1).

AFFECTS OF CURRENT FLOW
Two common effects of current flow are the generation of Heat and Electromagnetism.

HEAT:
When current flows, heat will be generated. The higher the current flow, the greater the heat generated. An example would be a light bulb. If enough current flows across the filament, it will glow white hot and illuminate to produce light.

ELECTROMAGNETISM:
When current flows, a small magnetic field is created. The higher the current flow, the stronger the magnetic field. An example: Electromagnetism principles are used in alternators, ignition systems, and other electronic devices.

A watt is a unit of measurement applied to electrical power in terms of the amount of energy consumed. Watts can be calculated by multiplying the voltage times the amperage in a circuit. If we continue with the water comparison wattage would be like the volume of water required to fill your bathtub or brush your teeth.

Infinite Resistance:
so much resistance that current cannot flow through the circuit (“open circuit.”)

Zero Resistance:
no resistance and current can flow through the circuit (“closed circuit”)

MEASUREMENT
An OHMMETER measures the resistance of an electrical circuit or component. No voltage can be applied while the ohmmeter is connected, or damage to the meter will occur.
Example: Water flows through a garden hose, and someone steps on the hose. The greater the pressure placed on the hose, the greater the hose restriction and the less water flows.