We've come a long way baby. In the old days you were lucky to have a bath once a month or have the privilege of newspaper for toilet paper instead of a pig eaten corncob. We tend to take things for granted these days. With all do respect, I sometimes have a hard time not laughing when a person flips out over a broken dishwasher for 2 days. Anyway this is a little reminder of what your grandparents may have had…if they were wealthy. 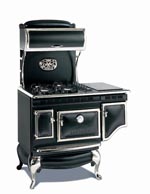 Cooking appliances have come a long way since impaling something on a stick over a campfire.  Older wood burning stoves were great for not only cooking pancakes but heating your entire house as well.  A nice added benefit in January but in July not so nice.  Brings new meaning to sweating over a hot stove all day.  This effect would also reduce the amount of salt required to season your food.
With the invention of the pellet and charcoal stoves, temperatures could be better regulated through the use of a consistent fuel source. (Wood pellets or charcoal) The stove would also require less attention by using a hopper system to slowly fee fuel from a storage container (hopper) into a burn-pot area; they create a constant flame that requires little to no physical adjustments and are still in use today.
In the second half of the 19th century gas burners could be cycled on and off to maintain an even more precise temperature range with baking results equal to or in some cases better that today.  By the 1930s electric cooking technology was beginning to take hold.  The use of electric heating elements enabled greater control over the accuracy of oven temperatures; however, a heat source is only as accurate as its thermostatic control.

Washing machines have not always been automatic. In the

early years of human history people would slap their wet clothing against rocks to get them "clean". In fact the mechanical action of washing clothes is only one part of the equation, soap is of equal if not greater importance. Soap and in recent history chemical detergents grab hold of additional materials such as dirt and grease allowing it to be beaten free of fabrics. Washboards were a giant leap forward. They generated a great deal more motion with much less physical movement and work. (Tell that to someone who used one.) 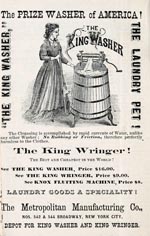 Later washboards were attached to gears and levers then placed inside of a water containment tub. As the crank was manually rotated the washboards would oscillate back and forth beating the heck out of the clothing being washed. The next logical step was to attach a motor. The first motor driven washers would use belts to drive the crank wheel. This was very convenient but also extremely dangerous. Today we can't even lift the lid of a

washer to watch the magic happen. The evolution continued to the mechanical marvels we have today, which are really basically the same animal but with shorter life expectancy, a shiny cabinet, and pretty lights. At least your not at risk of getting something ripped off when its laundry day.

Before the invention of the refrigerator, icehouses were used to provide cool storage for most of the year. Placed near freshwater lakes or packed with snow and ice during the

winter, they were once very common. An Icebox was the common appliance for providing refrigeration in the home before safe refrigerants made compact mechanical refrigerators feasible. Iceboxes were commonly made of wood and many were beautiful pieces of furniture. Iceboxes had hollow walls that were lined with tin or zinc and packed with various insulating materials such as cork, sawdust, straw or seaweed. A large block of ice was held in a tray or compartment near the top of the box. The warm air within the lower storage compartment was pulled into the compartment where a bock of ice was stored. As the ice block melted heat was removed from the cabinet in the form of water. Some finer models had spigots for draining ice water from a catch pan or holding tank. In cheaper models a drip pan was placed under the box. The user had to replenish the ice that melted, normally by obtaining new ice from an iceman.

William Cullen at the University of Glasgow demonstrated the first known artificial refrigeration system in 1748. In 1805 Oliver Evans designed the first refrigeration machine that used vapor instead of liquid. Ferdinand Carré of France developed a somewhat more complex system in 1859 that utilized equipment that contained rapidly expanding ammonia. Later in 1922 a model that consisted of a wooden cold box, water-cooled compressor, an ice cube tray and a 9 cubic feet compartment, home units usually required the installation of the mechanical parts, motor and compressor, in the basement or an adjacent room while the cold box was located in the kitchen, and cost $714.00. A 1922 Model-T Ford cost about $450.00.

In 1923 Frigidaire introduced the first self-contained unit. The first refrigerator to see widespread use was the General Electric "Monitor-Top" introduced in 1927. The compressor assembly, which emitted a great deal of heat, was placed above the cabinet, and surrounded with a decorative ring. Over 1,000,000 units were produced. As the refrigerating medium, these refrigerators used either sulfur dioxide, which is corrosive to the eyes and may cause loss of vision, painful skin burns and lesions, or methyl formate, which is highly flammable, harmful to the eyes, and toxic if inhaled or ingested. Many of these units are still functional today. The introduction of Freon expanded the refrigerator market during the 1930s. Separate freezers became common during the 1940s. These appliances did not go into mass production for use in the home until after World War 2. The 1950s and 60s saw technical advances like automatic defrosting and automatic ice making. More efficient

refrigerators were developed in the 1970s and 80s, even though environmental issues led to the banning of this very effective refrigerant. In the early 1990s 1,1,1,2-Tetrafluoroethane (R134a) and other chemical variations gradually replaced Freon as the primary magical agent that keeps our all important ice cream the perfect temperature.

Dishwashers are a fairly new luxury. In the old days if you couldn't hire a dishwasher you were a dishwasher. The first reports of a mechanical dishwashing device are of an 1850 patent by Joel Houghton of a hand-powered device. This device was made of wood and was cranked by hand while water sprayed onto the dishes. This device was both slow and unreliable. Another patent was granted to L.A. Alexander in 1865 that was similar to the first but featured a hand-cranked rack system. Neither device was practical or widely accepted. In the 1920-1940s the first dishwashers similar to what we have today were

being developed; however, it was not until around the 1970s that modern dishwashers were widely used. Amazingly enough some of those dishwashers are still in use today. With the glorious invention of modern marketing and manufacturing practices if you get ten years out of a dishwasher you buy today consider yourself lucky. In the same ways that soap an detergents are of crucial importance to the washing of clothing, they are critical in removing that unidentified funk from your glasses, plates, and pots. The history of detergents is commonly overlooked yet of significant importance.